No audience with the King of Tonga

New Zealand, like most other countries these days, requires for tourists to already have an outbound ticket at the time of arrival. That kind of messed up our original plan to travel through New Zealand at our own leisure and then just drive to the airport when we had enough and pick the next best flight to a fancy destination. Instead we had to decide MONTHS in advance where we wanted to go after New Zealand! Without having bothered to consult any travel guide beforehand we had booked a flight to the Kingdom of Tonga. It had a nice ring to the name 🙂

Well MAYBE we should have done some research first, because we missed the whale watching season by three monhts 😦 and apart from the fancy name there wasn’t a whole lot else to do or see in the last kingdom of the South Pacific. We’re still trying to figure out, why so many people seem to have heard of Tonga before when other Pacific island gems (like the Cook Islands or Vanuatu) remain relatively unknown.

Let’s start our time in Tonga with the very accurate introduction of the Lonely Planet:

“Say goodbye to tourist hype – you’re now in the Kingdom of Tonga. This is a country that survives on international aid and remittances sent from Tongans living overseas. You may get the impression that most Tongans would prefer visitors to donate their dollars and not leave the airport; expats seem determined to build a tourist industry, but most of the locals just don’t seem to care. In some ways, this is incredibly refreshing and in others incredibly frustrating.” ( © Lonely Planet – Pacific Islands) 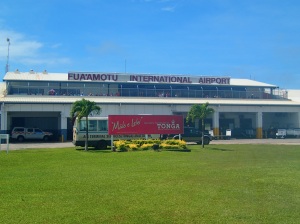 When our Virgin Australia flight from Auckland arrived at Fua’Amotu international airport on Tongatapu we didn’t quite realise that this would be our last decent airplane for a long time. We enjoyed the warm weather and absorbed our first impressions of the Tongan island flair on the way to Tonga’s capital Nuku’Alofa.

Well to be honest there was not much to absorb other than plenty of coconut palms, ragged huts/houses and the people and animals on the side of the road. We soon arrived at the Little Italy Hotel, where we would stay for the next two nights. Our air-conditioned room had a cute italian style decor and great ocean view … we just won’t mention the peeling tapestry or post stamp sized pool here 😉 The ferry wreck sitting on the corral reef just outside the hotel apparently crashed into the reef a few kilometres up the coast some years ago and was ‘relocated’ to its current resting place by a cyclone just recently. “Too difficult to remove’ was the comment of the hotel staff … we guess they’re just hoping for the next cyclone to get rid of it again 🙂

We quickly put our luggage in the room and walked along the foreshore promenade (a gift from the people of Japan) to the royal residence (a gift from New Zealand) on the outskirts of Nuku’Alofa. What the pictures don’t show are all the empty plastic bottles, cans and garbage everywhere and Bea’s pictures of the residence are quite flattering because they don’t show the rusting fences or peeling paint. 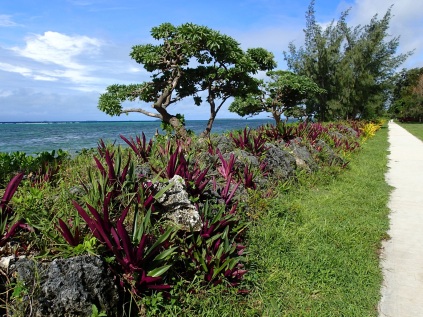 a common sight in Tonga are the ever present pigs 🙂

When we saw one of the military guard open a gate to the palace we decided to stick around and wait for a glimpse of the king. About half an hour later a small police convoy escorted a black SUV with tinted windows and HM1 license plate to the entrance gate. Through the fence we saw an unremarkable man get out of the car and step into the residence without bothering about the (only) two German tourists waving at him from the street 😦

After a relaxed coffee at Friends Cafe and a nice fresh coconut from the market we wanted to quickly get some cash from the ANZ ATM before returning to our hotel. Well there’s no such thing as quickly or smooth in the Pacific Islands!

After the usual procedure of card-in, secret PIN typing, withdrawal amount selection, confirmation, card-out, receipt and listening to whirring sounds in the machine … the magic money box just wouldn’t open 😦 BUGGER! No hotline on the ATM, no idea where the ANZ branch was and it was after 5pm anyway – DOUBLE BUGGER! On the way back to the hotel we passed the central police station and decided to file an incident report to be on the safe side. After the officer diligently wrote down our story he asked us to show him what happened at the ATM again: so card-in, secret PIN typing,

withdrawal amount selection, confirmation, card-out, receipt, listening to whirring sounds in the machine and … sure enough the ATM opens with the chosen amount – TRIPLE BUGGER! Nothing else we could do that day and we returned to our hotel in low spirits feeling ‘robbed’ by a bloddy ATM.

Using the flimsy hotel WIFI signal the next morning we saw that there were indeed two ATM debits to our card from the previous day. When I called the Tongan ANZ ATM hotline I only got a grumpy lady asking me why I bothered calling her in Fiji (???) instead of reporting it to the Tongan branch instead – huh? So we walked back to town, found the refrigerator chilled ANZ branch and patiently waited until our number was finally called (not the funny looking guy, not the funny looking guy please … well guess who we got). The funny looking guy was as much help as an empty coconut and it took him what felt like half an hour of staring at the two ATM receipts before he finally had a bright moment and called the branch manager. It didn’t take her more than 30 seconds to understand our story and put me on the phone to our Aussie bank to file an ATM dispute. Turned out we could have just called our Aussie bank the day before and let them sort out the issue right away. Duh!

After this banking incident it was finally time for some sightseeing: Abel Tasman’s landing site, royal tombs, memorial of Captain Cook’s landing site (funded by New Zealand aid), Ha’amonga ‘a Maui Trilithon (the Pacific’s equivalent of Stonehenge) and Anahulu Cave (a dirty hole in the ground originally funded by Australia aid, but the generator and lighting were long gone).

But when the island’s top attractions include a double headed coconut tree you realise just how little there is to see. All the more surprising that neither the hotel staff nor the driver understood why the German tourists were keen to see the fishing pigs (Duh! Pigs are fishing in Tonga all the time).

Ha’amonga ‘a Maui Trilithon … really impressive, but I was missing some signs to read 🙂

Anahulu Cave – dark, sticky and full of garbage (which doesn’t stop them from charging $10 entrance fee)

This entry was posted in Tonga. Bookmark the permalink.