Queenstown, Glenorchy and a lot of Middle Earth 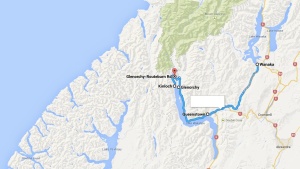 One hour south of Wanaka our next stop was Queenstown, adrenalin capital of the South Island and probably the first place in New Zealand where we saw more travellers from England than from Germany. Despite a population of just over 20.000 people, Queenstown’s central location in the South Island means that EVERY visitor, backpacker and tourist will eventually pass through this little town. After a couple of weeks in Golden Bay and on the West Coast it felt almost crowded and it became ridiculously hard to find a place to stay since we didn’t book anything in advance.

After hours of browsing the web and calling around, we spent the first night in a lodge where a Kiwi school had their annual family outing and kids where running, jumping and screaming around everywhere. The next day our desperate search for an alternative brought us to the Spa B&B in Frankton, which was a nice mix of Austrian managed B&B and Japanese massage Spa where we stayed the next two nights. Since neither of us felt like skydiving, paragliding or any other adrenalin adventure and it was raining most of the time we spent a lot of time enjoying the coffee in the Old Man Rock Cafe and watching other tourists 🙂 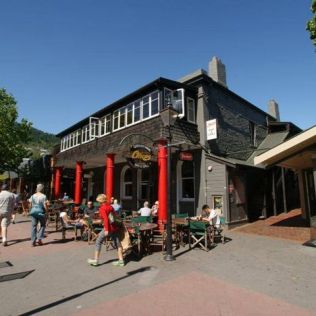 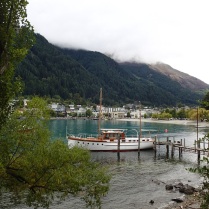 On Friday (Valentine’s Day) the accommodation situation in Queenstown collapsed altogether and since our travel budget couldn’t afford $1.000 per night we decided it was time for some camping anyway and headed to Glenorchy and the Dart Valley.

The drive from Queenstown to Glenorchy along Lake Wakatipu was one of the most beautiful sceneries of our entire New Zealand trip! Bright blue sky, the sun reflecting in the emerald blue lake with snow topped mountains in the background … what an amazing view!

No wonder Peter Jackson chose this place for several Lord of the Rings film locations and Isengard, Ilithien (where Frodo and Sam see the Oliphaunts) and the Misty Mountains where all filmed in this area:

Ilithien … just imagine oliphants walking by in the distance 🙂 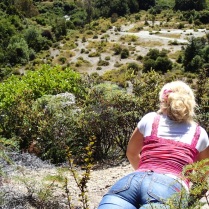 one hobbit watching for oliphants

the other hobbit watching for oliphants 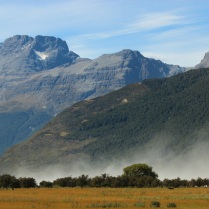 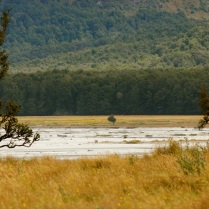 this little tree is supposedly the location of Saruman’s tower 🙂

Saruman did not exaclty conjure a snowstorm or throw boulders at us, but the weather was rather weird in this place: we arrived in bright blue sunshine when suddenly swirls of dust where hovering in the riverbed and a particularly nasty gust of wind broke one of our tent poles 😦 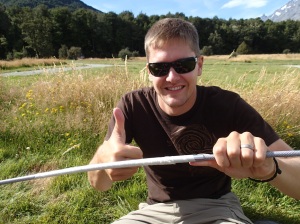 After we moved our tent closer to the forrest the rest of the evening was nice and sunny again, but the next morning was all clouds, rain and grey:

Glenorchy in the sun …

… Glenorchy in the rain. Now we know why they were called the Misty Mountains in Lord of the Rings

Not exactly the weather we were hoping for since Bea had booked a Lord of the Rings Trilogy Loop horse ride (for very experienced riders only) and I wanted to hike part of the Routeburn Track, another one of the 10 Great Walks of New Zealand. Apparently it wasn’t all that bad down in the valley, but the further up I walked into the mountains the worse the weather got. Supposedly there is a lake and a conical hill up there somewhere, but when I reached Harris Saddle shelter it felt like the hut was hovering in the clouds. After a quick lunch break with some other miserable hikers hiding in the shelter it was time to turn back and the further down I walked the better the weather got again. Imagine my surprise when I met Bea’s old boss and his wife halfway down the mountain … the world is small indeed, isn’t it?

view back into Dart Valley

Harris Saddle shelter in the mist 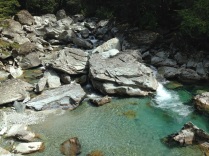 Bea had a bit more luck with the weather, but had an ‘adventure’ of her own on her way to Dart Stables for her Trilogy Loop. After kindly dropping her hubby at the start of the Routeburn Track, she was in a bit of a hurry to get to her horse track on time (our stupid GPS claimed she would need 45 minutes and had only 25 minutes …). Suddenly a hawk materialised on the road out of nowhere, snacking on some roadkill and instead of simply flying away decided to hug the front bumper of our car. When she couldn’t see anything in the rear view mirror and was too much in a hurry to stop she thought that maybe the hawk had gotten away after all. Well at least until she saw the driver of the next oncoming car stare at her front bumper with an incredulous look on his face 🙂 When she arrived at Dart Stables after only 15 minutes drive she was still in too much of a hurry and shock to do anything about the poor bird and just left it there and rushed into the stable … until a guy walked in five minutes later asking who was driving the car with the hawk on the front bumper and ultimately helped her to remove the dead bird *lol* When Bea picked me up in the afternoon and told me the story I couldn’t stop laughing 🙂

hawk snacking on some roadkill 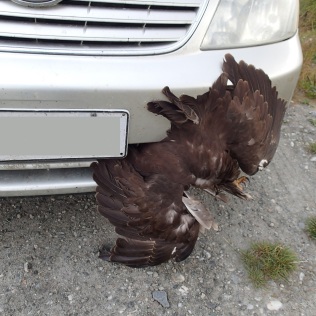 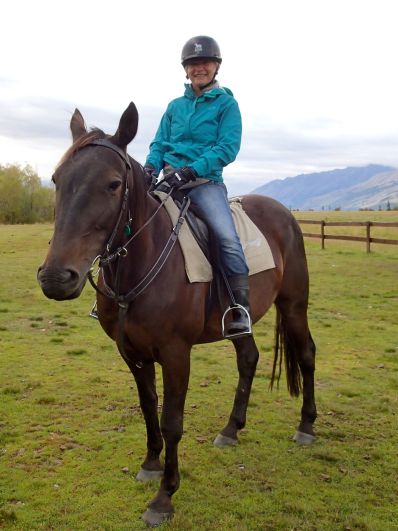 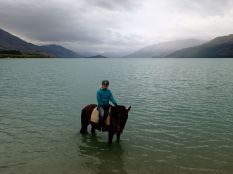 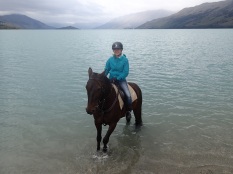 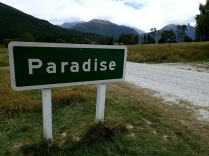 It certainly was an exhausting and exiting day for both of us and we enjoyed our best camping dinner so far that night (NO, we did not throw the hawk on the barbecue 🙂 we had lamb cutlets with potatoes and veggies).