Before we started to plan our travel we hadn’t even heard of the Republic of Vanuatu, let alone it’s 82 islands. But studying Google Maps during our travel preparations we noticed this small little island country west of Fiji and were intrigued. A country we had never heard of before? The more we read and heard about it during our trip, the more we were looking forward to visit these islands ourselves and eventually we even scratched New Caledonia from our travel itinerary to have more time for Vanuatu … but also because we were generally out of time (nine months just isn’t enough time for a decent holiday 😉 ).

Fiji Airways flight FJ261 from Nadi to Vanuatu was on time and we soon arrived at Bauerfield International Airport on Efate. We passed through Immigration smoothly and were soon greeted with a warm island welcome! 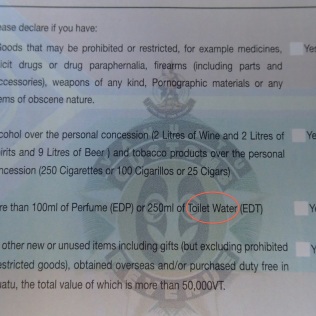 No, we did not plan to smuggle more than 250ml of toilet water into the country … or any toilet water at all! We leave that kind of stuff to the toilet water mafia 🙂

However, Efate was not our final destination in Vanuatu for that day and we still had to get to another island with the lovely name of Espiritu Santo. The onward flight with Air Vanuatu was already booked for 10:30 and we intended to use the two hour stopover on Efate to get some Vatu (the local currency) from an ATM and shop for a local SIM card. Unlike airports like Paris Charles de Gaulle or Heathrow you don’t need to include several hours to get from one gate to the other in the South Pacific :-). Well, we forgot to include plenty of island time and when we arrived at the ‘domestic terminal’ next door we learned that there were some problems with our plane and the earliest flight we could hope for was around 3pm … 5 hours delay on a boring airport! Bugger!

Since Vanuatu’s capital Port Vila was only 20 minutes from the airport we decided on a little field trip instead of waiting at the airport terminal. Our big luggage went into storage at the Air Vanuatu sales office and a few minutes later we hopped into one of the many mini busses that drive all around Efate. Formal taxis with a T license plate charge around 1.500 Vatu into town whereas these mini buses with a B license plate charge 150 Vatu per person, but may take some detours to drop of and pick up other people on the way. Well we were not in a hurry and some funny Kiwi guy on the bus helped us figure out where we actually needed to go in Port Vila: the main market for some fresh coconut!

hundreds of colourful dresses and sarongs 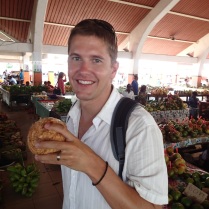 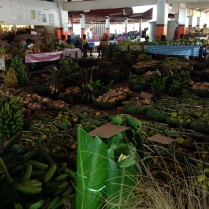 Unfortunately that bus ride was the last time we saw my beloved iPad mini, which must have slipped beneath the seat unnoticed 😦 Of course we had not remembered the license plate of the bus and even the Kiwi guy we accidentally ran into again could not help us locate the mini bus either.

So we spent the next hour at our second South Pacific police station reporting the loss of my iPad … walking to the ministry of finance two blocks down the road to pay the police report fee … and coming back to the police station to be told that we could collect the report some time later that week – island time style.

Needless to say that our mood wasn’t the best when we returned to the airport around 1pm only to be told that our plane was still broken and two flights with a 18-seat Twin Otter were scheduled at 5pm and 8pm that evening. Guess which one we were on? 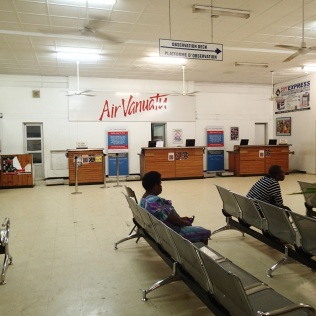 We spent another frustrating seven hours at the airport being bored and googling how useful the “Find my iPad” app would have been if I had activated it on my iPad BEFORE loosing it.

When the remaining few people at the airport finally prepared to board around half past eight the airline had one last surprise for all of us when they announced that there was 300kg too much weight for take off and passengers had to remove weight from their luggage! I grabbed my overnight bag and left the main backpack behind – which arrived two days and numerous phone calls later without any sort of apology from Air Vanuatu … guess they won’t win the airline of the year award from us this year !!!!

This entry was posted in Vanuatu. Bookmark the permalink.